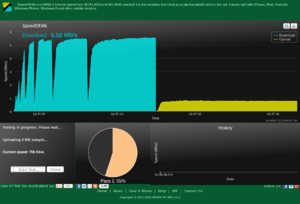 If your results are not as good as you would expect, try asking your neighbours what speeds they are getting. That will give you an indication of how well your neighbourhood is being served by Bell. If your speeds are slower than your neighbours then check Troubleshooting for ideas on what to check to improve your DSL performance.