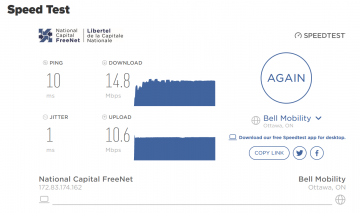 Since cable internet runs on a shared infrastructure that is affected by how many subscribers are using it at any one point in time, we recommend signing up for a faster cable internet plan than what you think you might need. This way if your cable speeds drop due to network congestion, you should still be receiving speeds much closer to what you were expecting.

Each updated version of the Wi-Fi specification supports faster data throughput than the last. Wi-Fi 6 can support much faster speeds than Wi-Fi 5, which can support much faster speeds than Wi-Fi 4. Some cable internet service plans can exceed the maximum speeds that your wireless device can support, so it's important to keep in mind the Wi-Fi version supported by your devices that are connecting to the internet. Older mobile phones or laptops that only support up to Wi-Fi 4 will likely not be able to